Back in 2017, I bought an Arduboy, a fun little Arduino development system which integrates an ATmega32U4 8-bit CPU, 32Kb of flash storage, 2Kb of RAM, a 128x64 pixel OLED display, some buttons, a speaker, and a battery in a Gameboy-like package.

OpenBSD had an old Arduino package available without the Arduino IDE, and it instead included a custom Makefile for end-users to build off of for compiling projects. But it was all pretty old and crufty and kind of sucked the fun out of tinkering with a new piece of hardware.

I was eventually able to compile and upload some test code from OpenBSD but I couldn't easily link in the Arduboy2 library which is something the Arduino IDE makes very easy.

In 2018, I found Arduino-Makefile which was like our custom Makefile but well-maintained and much easier to use. For my Arduboy game, it required a Makefile as simple as:

I created OpenBSD ports of Arduino-Makefile and the Arduboy2 library, and updated the Arduino port to a newer version. With that, I was able to rapidly work on my 1010 game and finish it.

Last week I bought an Adafruit Metro and their RA8875 LCD-interface board and wanted to quickly get them displaying something on an LCD via my OpenBSD laptop. When plugged into a USB port, the Metro attaches as a uslcom device and powers up:

I installed the arduino-makefile package which brings in the arduino and avrdude packages:

Adafruit provides a simple buildtest.ino file for the RA8875 in their library, which I fetched and then made a simple Makefile to build it:

This initially failed to build because metro was not in the Arduino's boards.txt file being an Adafruit product. I updated the OpenBSD arduino package to include Adafruit's boards.txt which has a definition for metro.

Next, I needed Adafruit's RA8875 library which itself needed their GFX library. To use a 3rd party Arduino library, just check it out from GitHub or wherever, and copy the whole thing to /usr/local/share/arduino/libraries where you'll see other directories like EEPROM and SPI.

Creating OpenBSD ports/packages of these is not necessary to get working quickly, but it's very easy to do and helps out anyone else wanting to use them. I did so and imported them so that one can just pkg_add arduino-adafruit-ra8875.

Once those libraries were installed, I added them to the Makefile:

Normally Arduino-Makefile can find and bring in libraries automatically but if it can't (such as when a library is a dependency of another library), you may need to explicitly list them in an ARDUINO_LIBS variable.

After a successful compilation with gmake, the build-metro/buildtest.ino file can be uploaded to the Metro board with gmake upload. This single step calls ard-reset-arduino (from Arduino-Makefile) to send the magic sequence to the device (/dev/ttyU0 by default) to put it into its bootloader mode, and then uses avrdude to upload the binary code and run it.

With that, I was seeing some nifty graphics on my new LCD hooked up to my Metro board. 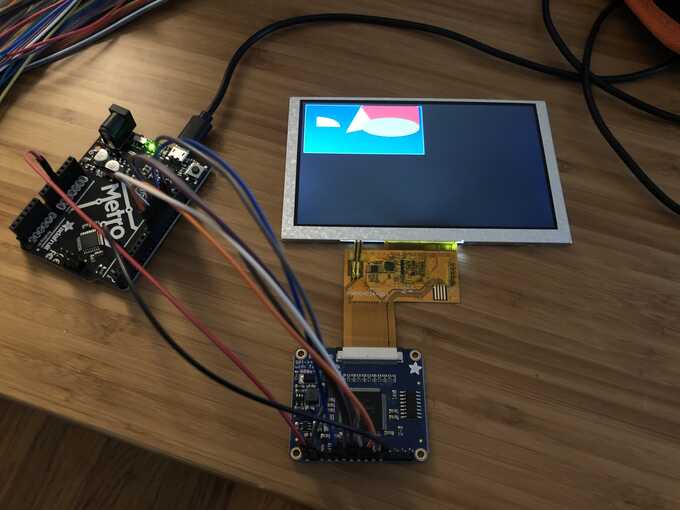 The buildtest program sends some debugging information over its serial port while it runs:

This data can be monitored with cu: